Signs of a Developing Codeine Dependence

According to the NLM, “Codeine is used to relieve mild to moderate pain. It is also used, in combination with other medications, to reduce coughing.” While codeine helps many individuals who struggle with pain and other issues, it can also become habit-forming and cause dependence. This is why patients are told not to take more of the drug than prescribed or take it more often than prescribed.

If you abuse codeine, you can also become dependent on the drug which can lead to addiction with continued abuse. If you are concerned that you may be developing a codeine dependence, look for the signs of such in your behavior, physical health, and even your moods and ask yourself if you might benefit from codeine dependence treatment.

There are many physical signs of a codeine dependence, and you can determine whether or not you may have an issue by looking for them. To clarify, just because you are dependent on codeine does not mean you are addicted or even that you have been abusing the drug. Dependence occurs when you become dependent on a drug, when you come to need it in order to feel good and normal. It can occur even if you have been taking codeine as prescribed. 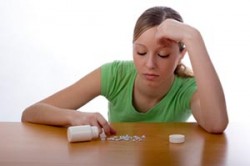 If you are starting to feel sick when you don’t take codeine you are developing a dependence.

Physical signs of a developing codeine dependence are

For someone who is dependent on codeine, the withdrawal syndrome that occurs often feels similar to having a bad case of the flu. If you are dependent on codeine and stop taking the drug, you will experience these issues and they will be very painful and uncomfortable. If you are already experiencing this as a result of stopping your codeine use (or an inability to get more codeine), you are already dependent.

If you begin to feel that you need codeine just to fall asleep or to curb your pain enough to get out of bed every day, you are likely dependent as well. If you decide to stop using codeine (whether you are using it legally or not), you should absolutely take precautions to minimize the effects of your withdrawal syndrome and even attend formal detox.

When you become dependent on a drug, you will notice that your behavior changes. It may be subtle at first, but it will become more obvious over time. If you are concerned about whether or not you are becoming codeine dependent, ask yourself the questions below.

If you realize that your behavior has become harder to control when it comes to codeine, you may be experiencing codeine dependence. The important part is that you realize it and are able to ask for help. It may not be a problem now, but if you decide to stop taking codeine, you could deal with very unpleasant withdrawal symptoms.

Other Signs of a Developing Codeine Dependence

Codeine dependence can sneak up on you. It is important to pay attention to the way you feel because there are some signs of dependence only you will notice. You don’t want to be caught off guard when you stop taking codeine, especially if you are taking it for pain or coughing. According to the NLM, “Some people even withdraw from opiates after being given such drugs for pain while in the hospital without realizing what is happening to them. They think they have the flu, and because they don’t know that opiates would fix the problem, they don’t crave the drugs.”

Other signs of a developing codeine dependence are

What Does a Developing Codeine Dependence Mean?

Developing a codeine dependence means that your body and mind need the drug to feel normal. This occurs in any long-term use of opioid drugs, but most people require some sort of treatment in order to successfully stop using codeine at this point, especially if they are abusing it. According to Harvard Medical School, detoxification, or “controlled and medically supervised withdrawal from the drug,” is where treatment should start. If you are only dependent on the drug (and not addicted), you may be able to end your treatment after you have successfully withdrawn from codeine.

It is normal to become dependent on codeine if you are using it for a long time. Just remember to look for the signs of a developing codeine dependence so that you can be treated appropriately when you are ready to stop taking the drug.