Those who abuse a drug like codeine often believe that they will not become addicted to it. The drug is prescription-based which causes many individuals to think that it is safe and will not cause any adverse effects, a common misconception. In addition, many abusers choose to drink codeine cough syrup mixed with alcohol or soda, something that they feel is less harmful and not as dangerous as abuse of other opioids or illegal drugs.

Codeine, even in its cough syrup form, can cause addiction, and it is important to understand this fact as well as to be able to recognize addiction to the drug when it occurs. Below are the symptoms of codeine addiction you cannot ignore.

Those who abuse this drug in the long term will eventually experience withdrawal from it if they suddenly stop, a sign that their drug use is becoming detrimental. If you take codeine and realize that you are starting to experience intense physical and psychological symptoms whenever you do not abuse it, you may want to ask yourself if it may be causing issues in your life.

According to the NLM, withdrawal symptoms associated with codeine abuse include:

These reactions may become very uncomfortable, and some users keep taking codeine in order to avoid them. This is a true sign of addiction.

Taking codeine recreationally over a long period of time will often cause a tolerance to build up in the individual abusing the drug. While codeine can cause intense euphoria and other symptoms the first few times it’s abused, users will recognize that these same effects can no longer be achieved with the same dose of the drug over time. This will often cause them to abuse codeine in higher doses each time, chasing that same high they originally felt. If you notice that you are beginning to exhibit this behavior as a result of tolerance, you are experiencing a classic symptom of addiction. 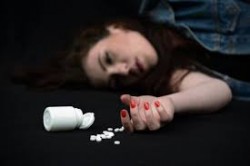 Overdosing on Codeine can cause severe respiratory depression.

According to the NIDA, “When abused, promethazine-codeine cough syrup presents a high risk of fatal overdose due to its effect of depressing the central nervous system, which can slow or stop the heart and lungs.” Many people who abuse codeine as a cough syrup mixed with soda (also known as purple drank or lean) do not realize the strong potential of this issue and may experience severe respiratory depression, a possibility that becomes even more likely with consistent, long-term abuse.

“Mixing [codeine] with alcohol greatly increases” the risk of overdose, which is also a common behavior among regular abusers. If you have been using codeine recreationally for a long time and experience an overdose from the drug, you should strongly consider attending addiction treatment. An overdose is often a sign that your codeine use has gotten beyond your control and you need treatment from healthcare professionals in order to stop abusing the drug.

The NIDA states that codeine can cause “a pleasurable increase in the amount of dopamine in the brain’s reward pathway,” which is why users feel a strong sense of euphoria when taking the drug in large doses. “Repeatedly seeking to experience that feeling can lead to addiction.”

You will start to crave the feeling the drug causes when you become addicted to it. Cravings are also a symptom that goes along with the codeine withdrawal syndrome if you suddenly stop abusing the drug. These ravings can become intense and you will not be able to think of anything else except for your desire for the drug. You will start to feel as if you are not yourself or that you cannot feel normal unless you are on the drug.

Behavior of a Codeine Addict

You will notice that your behavior begins to change once you become addicted to codeine. According to the DOI, common behavioral symptoms of codeine abuse include “mood swings, impaired coordination, depression and apathy,” but your addiction itself will also cause intense behavioral symptoms that often become dangerous before too long. These may include

The strongest behavioral symptom of codeine addiction entails an inability to stop taking codeine, no matter how many problems the drug causes in your life. Relationships, jobs, money, and other aspects of your life may all become lost to your codeine abuse, which is how you can be assured that you need treatment for addiction.

If you notice these symptoms in your life, ignoring them will only lead to more dangerous and problematic consequences which is why you must attend addiction treatment for codeine and slowly work toward recovery from this dangerous condition.