Codeine’s presence on drugstore shelves quietly belies this drug’s potential for abuse and addiction. As one of many opiate-based drugs, codeine’s addictive properties qualify it as a controlled substance making codeine subject to government regulation.

As a treatment for moderate to severe pain symptoms, codeine comes in prescription form as a single ingredient. For conditions involving mild pain, codeine, combined with other non-opiate ingredients, may be obtained without a prescription. In either case, the potential for codeine addiction remains.

Codeine addiction develops over the course of ongoing use of three months or more. This drug easily interacts with brain chemical processes in lasting ways, luring users into a web of physical dependence and withdrawal effects. After so long, codeine addiction comes on in full force once users develop a psychological dependency on the drug’s effects.

According to Columbia Health, key cell receptor sites located in the brain, spinal cord and gastrointestinal tract automatically respond to codeine. Codeine’s effects alter how a person perceives physical sensations of pleasure and pain as well as influences cognitive and emotional perceptions of everyday life.

The release of unusually large amounts of neurotransmitter chemicals relieves pain symptoms, while at the same time produces feelings of euphoria and calm. These interactions play a central role in how codeine addictions take root. 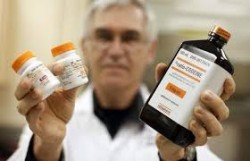 Repeated codeine use can cause addiction.

The brain’s natural affinity for codeine and drugs like it makes it easier for affected cell sites to become less responsive to the codeine’s effects with continued use. This means, someone who keeps taking codeine will require increasingly larger dosage amounts to see the same desired effects.

As cell sites become less responsive to codeine, they also weaken in their overall functional ability. After a while, the brain will require codeine to maintain normal chemical levels at which point the risk of physical dependency and eventual codeine addiction increases considerably.

The brain’s mesolimbic reward system regulates learning processes and basically determines what experiences become motivators in a person’s life. Codeine’s ability to alter brain chemical processes has a direct effect on the mesolimbic system. Over time, codeine’s effects on this system drive the codeine addiction process.

According to the U. S. National Library of Medicine, codeine abuse, codeine dependence and codeine addiction happen in stages as the drug’s effects continue to weaken the brain’s ability to regulate chemical processes. Ongoing drug use also weakens the brain’s actual physical structures.

By the time a person develops a codeine addiction, the brain has been “rewired” to depend on codeine much like it depends on its natural neurotransmitter chemicals. At this point, codeine’s effects regulate a person’s perceptions, belief systems and overall sense of purpose in everyday life.