Compared to morphine, Demerol and Percocet, codeine is one of the weaker opiate drugs, though no less addictive than the others. Codeine’s weak properties account for it being the most prescribed drug across the globe, according to Dickinson College.

Like any other opiate, long-term use of codeine increases a person’s chance of developing codeine addiction. More oftentimes than not, codeine products contain another non-opiate ingredient designed to intensity the effects of codeine. Ingredients commonly found in codeine products include –

As a highly effective pain-reliever, codeine interacts directly with the body’s brain and central nervous system. Pain signals travel from various areas of the body to the brain, which translates them into actual sensations. Codeine works by interrupting or blocking pain signal transmissions so a person doesn’t actually feel sensations of pain.

Codeine does this by altering chemical pathways in the brain. Codeine can also mimic the body’s own natural painkilling chemicals, also known as endorphins, which also works to camouflage incoming pain signals.

By the time codeine addiction sets in, codeine’s effects have altered brain chemical processes in lasting ways as well as “reconfigured” the way individual brain cell sites function, according to the NYU Langone Medical Center. In effect, the brain’s operations depend on codeine to maintain any semblance of normal functioning. 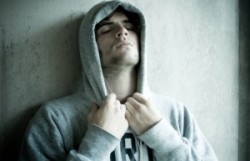 Feeling sick when you don’t have codeine is a sign of addiction.

The first sign of a growing codeine addiction takes the form of withdrawal episodes that grow increasingly longer in duration. Withdrawal effects develop out of the brain’s physical dependence on codeine’s effects. When needed amounts of the drug are lacking, the brain and central nervous system can no longer function normally.

For most people, withdrawal effects take the form of –

With continued drinking, a person will likely experience these effects on an ongoing basis. Since a lack of codeine accounts for why withdrawal effects develop, many people keep taking the drug in order to gain needed relief. This pattern of use plays a central role in the codeine addiction cycle.

Changes in a person’s lifestyle mark a turning point in the codeine addiction process as the drug’s effects have altered the brain’s physical structures as well as the way in which various brain regions function. Lifestyle changes may include –

At this point, a person’s life centers around compulsive drug-seeking and drug-use. Without needed treatment help, the codeine addiction cycle only gets worse as a person experiences ongoing physical and psychological decline.