How Does an Addiction to Codeine Develop?

When it comes to prescription and over-the-counter drugs, legal doesn’t necessarily mean safe. Such is the case with codeine-based drugs.

In spite of its presence in cough syrups and various pain-relieving medications, codeine’s classification as an opiate, narcotic drug carries a serious risk for addiction when used for nonmedical purposes. This means, an addiction to codeine can happen in much the same way as an addiction to any other opiate-class drug.

In actuality, all opiate-type drugs should be used on a short-term basis only, even when taken for medical purposes. Exceeding recommended dosage amounts or using the drug for recreational purposes will inevitably lead to an addiction to codeine.

This drug’s ongoing effects on brain chemical processes lure users into compulsive drug-using patterns that eventually take over their lives. By the time an addiction to codeine has formed, users are trapped inside a cycle of dependency that affects both the body and the mind. 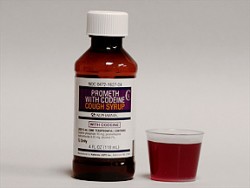 Regular use of codeine can lead to addiction.

Most all addictive-type drugs have the ability to cross the blood-brain barrier and access vital brain processes. In effect, codeine and drugs like it interfere with the brain’s ability to communicate with the rest of the body while causing widespread chemical imbalances throughout the brain and central nervous system.

An addiction to codeine develops out of the destructive relationship that forms between the drug and the brain’s chemical processes. Codeine’s chemical structure shares certain similarities with the brain’s own natural neurotransmitter chemicals. These similarities make it easy for the brain to “work with” codeine’s effects.

Once ingested, codeine stimulates groups of brain cell receptor sites in much the same way the brain’s own mechanisms interact with these cells. When stimulated by codeine, these sites produce copious amounts of neurotransmitter chemicals, so codeine easily overrides the brain’s own natural processes.

Once codeine starts to impair a person’s cognitive functions, a full-blown addiction to codeine has taken hold. While a growing physical dependence is part of the process, addiction to a drug stems from a person’s psychological dependence on the drug’s effects. At this point, users have reached a point where they genuinely believe they need the drug to function in everyday life.

In effect, the widespread chemical imbalances that result from repeated codeine use alters the brain’s overall structure and processes. By the time a person develops an addiction to codeine, the brain has essentially been “rewired” by codeine’s damaging effects.