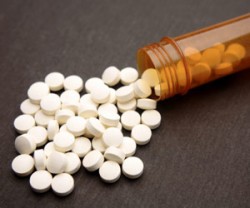 Codeine is a type of drug that helps treat pain and is a cough suppressant.

Codeine is a narcotic medication that is used in the treatment of mild to moderate pain, and as a cough suppressant.  An opiate-based medication, however it offers one main difference from most opiates; it can be used with other medications, like other pain relievers and muscle relaxers, combined into one pill or syrup.  Examples of this are Tylenol with codeine, Empirin with Codeine, Fiorinal with Codeine, and even Robitussin A-C.  This is one of the main reasons that codeine is considered to be the most widely used opiate in the entire world.

Most commonly prescribed as Tylenol 3, this medication is metabolized in the body in much of the same way as our bodies metabolize morphine.  Codeine is, like any opiate, habit-forming, with this risk increasing greatly when not taken as directed.  However, when compared to morphine, codeine is a much safer, but less effective on pain relief.  The chances of sedation and respiratory depression are much lower in codeine than in morphine, but its analgesic qualities are much less as well.

The Controlled Substances Act is a 5-tiered classification system used to list drugs based on their use and potential for misuse and abuse.  There are different classifications for codeine based on how it is made and what it is combined with.  Straight codeine has a schedule II classification, however, codeine and aspirin is listed as a schedule III.  When used as a cough suppressant, the classification is brought down to schedule III or V, depending on its make-up.  Additionally, there are a handful of states that offer a schedule V form of diluted codeine and sell it over the counter.

The Effects of Codeine on its Users

Codeine is a mild pain reliever, prescribed to patients for mild to moderate pain and discomfort.  But regardless of how mild it may be compared to other opiates, codeine is still a strong analgesic medication that can cause dependency in its users.  Codeine’s tolerance building qualities can cause users to need to use more and more of the drug to maintain the same feeling that they got previously.

This need for more than they are prescribed can make the user feel like they have to do things they would not normally do to get the extra required by their growing habit.  These dangerous behaviors can include things like lying to and stealing from their loved ones, as well as committing crimes and participating in dangerous situations.

Codeine addiction can start to develop in as little as weeks, when not taking the drug as directed by your doctor.  Once you form a habit to codeine, you will find it hard to quit.  This is because your body will go through something called withdrawals when you try to stop taking it.  Withdrawals from codeine are similar to those of any opiate, and include many uncomfortable and sometimes painful symptoms.

Because of the severity of the withdrawal symptoms associated with codeine, it is highly recommended that you do not attempt to detox at home.  The most severe of these symptoms include seizures, coma and death.  But there are medical detox programs offered at most hospitals and recovery centers throughout the country.  These programs can help you safely detox while minimizing your discomfort.