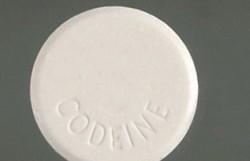 Because of codeine’s opiate nature, it has been abused for as long as it’s been around.  That being said, it is no surprise that there are many street names that are used for this drug.  Drug users make code names for a drug so that they can try to avoid unnecessary attention and suspicion of drug use by outsiders.  These code names can sometimes resemble or abbreviate its actual name, or even provide a description of its physical attributes.

Due to codeine’s nature of being combined with other medications, codeine has many forms it takes on, and can be called by a number of different things depending on which medication you mean.  This can make it more difficult to notice any code names, because there are many possibilities for this substance.  Additionally, the names listed in this reference may be a partial list of street names for codeine, as users do not write records for this sort of thing.  Also, new names may be created at any time; all it takes is for the name to stick, in one place at one time, and then you have another code name for the same substance.

When speaking of codeine by itself, it is usually called Cody or captain Cody.  This is an obvious play off of its actual name, but can disguise the fact that the person is speaking about a drug.  If you hear a loved one talking about someone named Cody, but don’t think they know a Cody, this could be a sign that they are trying to illicit some codeine.  Another popular street name for codeine is schoolboy.  Schoolboy is a word play off of the street name Cody, and is just another way to throw off suspicion of illegal drug use.

The most common use of codeine is its combinations with Tylenol.  These Tylenol combinations can come as Tylenol with Codeine No. 1, 2, 3, or 4.  These numbers represent the strength of the codeine in the pill.  For instance, Number 1 only contains 8 milligrams of codeine, whereas number 3 contains 30 milligrams.  The street name for these is usually T and then the number, for instance the term ‘T-threes’ represent Tylenol with Codeine Number 3.

Street Names for the Use of Codeine and Glutethimides

When codeine is taken in conjunction with Glutethimides, it is given street names all to their own.  Glutethimides, commonly known as Doriden, are hypnotic sedatives developed for treating insomnia in patients.  However, when mixed with codeine, it allows the body to change high doses of codeine into morphine, increasing the high felt from codeine.  When done in this fashion, the street names include doors and fours, loads, and pancakes and syrup.  It is very dangerous to mix codeine with any other medication.  You should consult your doctor before taking any other medication, including herbal and over-the-counter supplements while taking codeine.