Can You Take Codeine During Pregnancy?

Individuals taking codeine are advised by the NLM to tell their doctors “if they are pregnant or plan to become pregnant.” You should also call your doctor immediately if you are taking codeine in a prescription treatment regimen and become pregnant unexpectedly. But does this mean it is safe or unsafe to take codeine during pregnancy?

Codeine Use and Abuse

Some prescription drugs can be take during pregnancy but must be used more carefully, and the patient must be monitored for any symptoms that show the drug may be affecting the mother or the fetus. However, codeine is often abused for its euphoric effects as well. Substance abuse is always dangerous and especially so during pregnancy. According to the NLM, “Using illegal drugs may cause underweight babies, birth defects or withdrawal symptoms after birth.” Since codeine is meant to be taken only by a doctor’s prescription at certain doses, abusing it is the same as abusing illegal drugs.

But can codeine ever be taken safely by a pregnant individual as part of a doctor’s prescribed treatment for mild to moderate pain or coughing?

Effects of Codeine Use During Pregnancy

According to a study from the NCBI on the drug’s effects when begin taken by pregnant individuals, “No effects of maternal codeine intake… were observed on infant survival or congenital malformation rate.” This study shows promising results, but issues can still occur when a pregnant individual uses codeine. 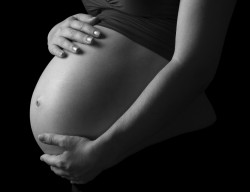 Withdrawal from opioids can cause a variety of side effects.

For example, the drug is an opioid analgesic, and these medications cause dependence. The mother will often become dependent on the drug when taking it regularly, and the child will as well. After the child is born, withdrawal symptoms will often result because the baby is no longer receiving the drug through the mother. Normally, withdrawal from opioids is not life-threatening. However, it can cause dangerous symptoms in newborns such as:

These symptoms could become extremely harmful and need to be monitored and treated by slowly weaning the baby off the medication. The withdrawal syndrome can also cause other symptoms in infants that adults do not experience, such as:

This syndrome can be problematic, but it usually doesn’t keep pregnant individuals who need to take codeine from being able to. Doctors are normally informed about the specialized needs the infant will have and are able to treat them when the child is born.

Unfortunately, though, there have been some instances where opioid use during pregnancy has been linked with birth defects. However, these findings are not always consistent. According to the CDC, “When making treatment decisions just before or during pregnancy, it is important that women and their doctors weigh the benefits of opioid analgesic medications along with their potential risks for birth defects.” In one study, these possible birth defects included:

As a result of the most recent medical knowledge, codeine can still be taken by a doctor’s prescription during pregnancy. However, it is important for a codeine user hoping to become pregnant to discuss the issue thoroughly with their doctor before making a decision.