Codeine, one of several opiate-based drugs, was the first opiate to be marketed as an over-the-counter drug, according to Dickinson College. Like most every other opium derivative, codeine also exists in prescription forms for the treatment of pain-related conditions.

In spite of its being a tried and true pain-relieving agent, codeine carries considerable risk of abuse and addiction. These risks apply for the recreational drug user as well as for the person who attempts to follow prescription guidelines.

Not surprisingly, codeine’s availability as an over-the-counter product and prescription pain med has opened up a range of “opportunities” for abuse and eventual addiction. While seemingly harmless in either form, the long-term use of codeine comes with more than a few unexpected consequences.

People who become dependent on codeine face some tough challenges since early codeine withdrawal symptoms have kept more than a few people hooked on the drug. More oftentimes than not, addicts continue using out of fear of experiencing the dreaded withdrawal effects of the drug.

As a prescription drug, codeine combined with other ingredients, such as aspirin, ibuprofen and acetaminophen offers up many brand name narcotic drugs, some of which include –

While these added ingredients are non-addictive, they nonetheless increase codeine’s overall effects including its abuse and addiction potential. When ingested, codeine’s chemical make-up allows it to blend easily within the brain’s chemical system. This compatibility factor accounts for much of the discomfort experienced with codeine withdrawal symptoms.

Using codeine for too long a time gradually throws off the brain’s chemical balance, disrupting most every bodily process regulated by the brain and central nervous system. In effect, the brain becomes dependent on codeine’s effects to the point where normal bodily functions cannot be maintained without it. Codeine withdrawal symptoms develop out of this overall state of dysfunction brought about by the drug’s ongoing effects on brain function. 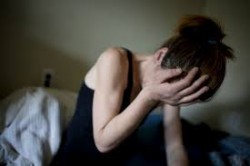 The early symptoms of codeine withdrawal can develop within 72 hours and are usually physical.

According to the U. S. National Library of Medicine, codeine withdrawal can develop under one of three conditions –

With chronic, long-term drug use, brain chemical imbalances have reached a point where no amount of codeine can make up for the damage done to the brain’s chemical system.

The early stage of withdrawal entails mostly physical-type symptoms, such as –

On average, early stage of codeine withdrawal symptoms can last anywhere from five to seven days.

Ways to Cope with Early Symptoms of Codeine Withdrawal

Codeine disrupts the body’s gastrointestinal system in much the same way it interferes with normal brain function. Symptoms of diarrhea and abdominal cramping result from the drug’s ability to depress or slow down gastrointestinal processes.

Fortunately, simple over-the-counter remedies may be enough to offer much needed relief from these symptoms. Products such as Pepto-Bismol and Imodium A-D work well at righting gastrointestinal processes and relieving diarrhea and nausea symptoms.

Codeine exists as a lipid-soluble substance that easily crosses in and out of body cells and tissues. This means, codeine residues can build up inside cells and tissues after long-term drug use.

A person will likely continue to experience codeine withdrawal symptoms for as long as codeine residues remain stored up inside the body. For this reason, it’s important to stay hydrated throughout the early withdrawal stage.

Drinking lots of water helps flush out residue materials and essentially supports cell and tissue repair processes. This in turn helps move the body through the withdrawal stage.

While over-the-counter sleep aids may seem like a good idea, trading one dependency for another only works to add insult to injury. A better way to cope with sleep problems entails getting regular exercise on a daily basis.

According to Harvard Health Publications, codeine’s effectiveness as a pain relief treatment stems from its ability to interfere with incoming nerve signal transmissions to the brain. In effect, codeine blocks signal transmissions and prevents pain messages from reaching the brain’s sensory-based regions.

People coming off chronic, long-term addictions stand to experience the very worst of codeine withdrawal symptoms considering the degree of damage long-term drug use leaves behind. Under these conditions, medication replacement therapies can help a person wean off codeine’s effects as opposed to leaving the brain to function in a near incapacitated state.

Medications used for this purpose include –

In general, the more severe the addiction the worse codeine withdrawal symptoms will be. Opting for medication replacement therapies can save a person much distress as well as greatly increase the likelihood of a successful detox withdrawal stage.