Whether recovering from a serious injury or experiencing headaches or back pain, codeine works well as a pain reliever. Persistent cough symptoms can also be treated with over-the-counter, codeine-based cough suppressants.

Codeine’s use as an analgesic and cough suppressant works by altering how the brain perceives pain and pleasure, according to Columbia Health. In the process of blocking pain signals, codeine effects elicit sensations of euphoria and calm.

Codeine addiction symptoms develop out of the drug’s pleasant aftereffects, which incite ongoing use for people most susceptible to addiction. As codeine interferes with normal brain chemical processes, it inevitably affects a person’s overall perceptions, personality and behaviors. 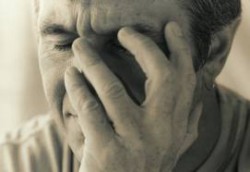 Having a decreased ability to deal with stress is a sign of addiction.

Codeine’s ability to interfere with key brain chemical processes accounts for the codeine addiction symptoms a person experiences with prolonged drug use. According to the U. S. Department of Interior, the effects from a single dose of codeine can last anywhere from three to six hours.

Like most all opiate type drugs, codeine stimulates brain neurotransmitter chemical secretions, most notably, dopamine, serotonin and norepinephrine secretions. These chemicals play a central role in regulating a person’s sense of overall contentment and ability to cope with daily life.

After so long, the ongoing stimulation of brain neurotransmitter secretions leaves the brain in a depleted and imbalanced state. At this point, codeine addiction symptoms develop into signs of depression, some of which include –

Codeine acts as a central nervous system (CNS) depressant by slowing down most all processes regulated by the CNS. Someone who abuses codeine will eventually start to exhibit signs of sedation, a fairly obvious codeine addiction symptom.

With continued use, a person steadily increases dosage amounts to the point where he or she can actually experience brief lapses in consciousness as the codeine’s effects overwhelm vital brain processes.

Once a person becomes addicted to codeine’s effects, meeting everyday obligations, such as work, family obligations and even personal hygiene will lose importance as ongoing cravings for the drug take center stage. Compared to other codeine addiction symptoms, compulsive drug-seeking and drug-using behaviors are most indicative of an addiction at work.

According to the National Institute on Drug Abuse, codeine’s effects increase the body’s cortisol hormone levels. Cortisol hormone is normally released in response to stress. Much like the way codeine offsets brain neurotransmitter levels, it has the same effects on cortisol production.

As a result, someone who abuses the drug will become highly sensitive to everyday stressors. In this case, codeine addiction symptoms will take the form of irritability, emotional outbursts and an overall inability to cope with daily life stressors.